Manon McKinley has spent her career helping other people. She was an emergency nurse, a manager of clinical practice and a case manager for community care.

Manon is one of those people with an endless supply of happiness and energy. At work, she could focus on a task even when everything around her was in mayhem. She would not stop until things got done and done well. Just by being herself, Manon has quietly touched and inspired many lives.

However, a rare form of cancer (adrenal cancer) has afflicted her and the road ahead will be a tough one. Nowadays she spends time at home with her 4 year old daughter, Abigail.

Now, it is also part of Manon’s nature no to ask for help. But a few days ago, she sent out an email asking for used wood and other material so she and two friends could build a playhouse for Abigail. It was something she had always wanted to do and would like to accomplish while she is strong enough. She has so many fond memories of her own playhouse that she would like to share such moments with her daughter. 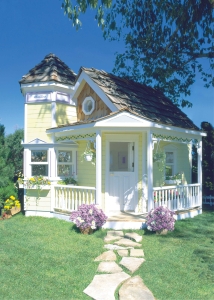 Well, her friends have decided to go a step further and build her the playhouse of her dreams!!! So The Playhouse for Abigail project was started. We have presented her several designs and she reluctantly but happily chose the one of her dreams. The enclosed picture will be Abigail’s playhouse.

Read about Abigail’s Playhouse from the Ottawa Citizen published May 24, 2005.

Read another article about Abigail’s Playhouse from the Ottawa Citizen published April 23, 2005

essay about change in society.
email
Share This With A Friend